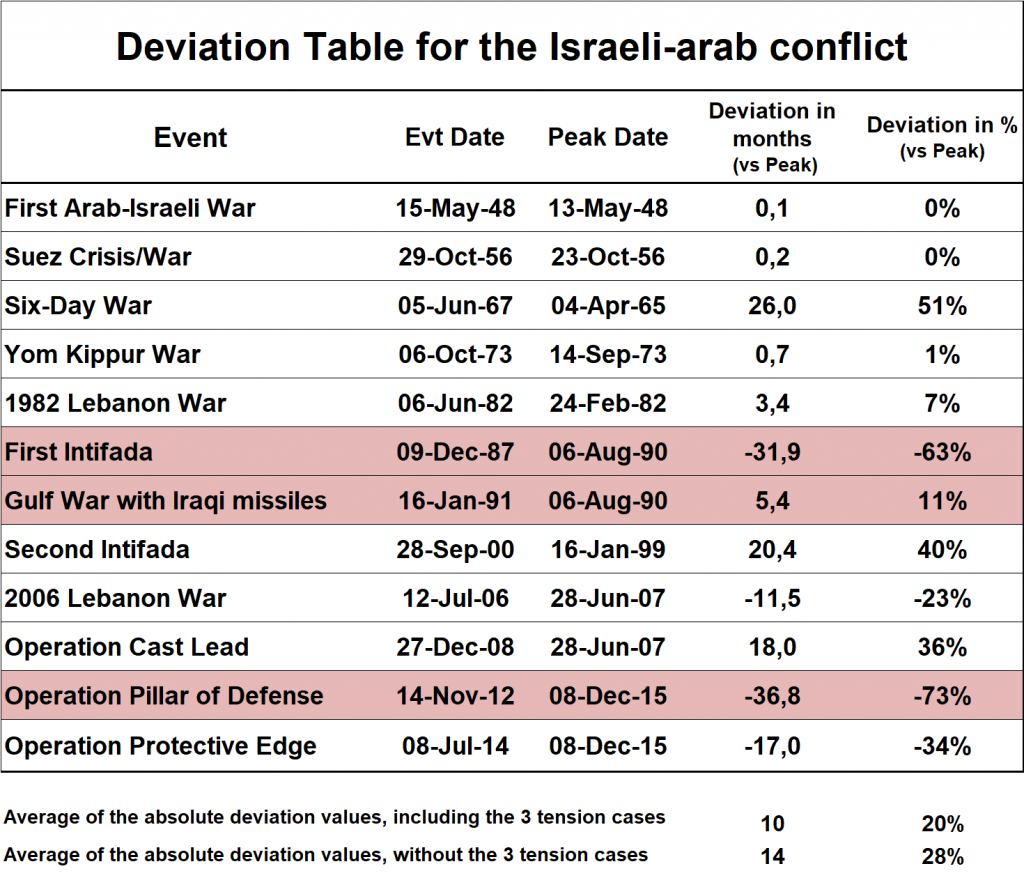 First of all, it is necessary to verify whether the wars indicated are indeed those recognized for this conflict. There are 3 wars that are presented by some authors as tensions and by others as wars: the first Intifada, the Iraqi missiles on Israel during the Gulf War, the “Pillar of Defense” operation.

Taking the unfavorable case where these episodes are considered as wars, 75% of the wars (9 out of 12) are triggered during the amplification phases.

The Israeli-Arab context helps to demonstrate the “War Cycle”

Analysis of the Arab-Israeli conflict based on contextual data

Place of the Arab-Israeli conflict in the “War Cycle”

The Arab-Israeli conflict remains the outstanding case of the “War Cycle”, both in its war and peace aspects.

Peace initiatives have, until now, always taken place during mitigation phases, only to be more or less contested during the next amplification phase. Some agreements remain, others disappear.

During the 2013-2017 amplification phase, this conflict did generate a war, as usual.

During the 2018-2022 mitigation phase, this conflict did generate peace and normalization agreements, as it sometimes does.

The “War Cycle” on the Arab-Israeli conflict is still relevant, even if it seems to be attenuated.

This conflict should lose its recurring reality in the 1930s, when the Arab world will reconfigure itself regionally with Israel then being considered a regional state on the same way that the other states of the Arab League. This time is approaching but is not yet a reality and will not prevent some jolts during the period 2022-2026.

Theoretically this was the period when there could be a peace initiative, even partial. In the first quarter of 2019, there was no such prospect, but with the Trump-Netanyahu tandem, there was indeed an American peace attempt and the Abraham Accords in 2020, resulting in an agreement between Israel and the United Arab Emirates and Bahrain, and then an agreement in January 2021 with Sudan. The normalization of relations between Israel and Morocco took place in December 2020, following a deal between the United States and Morocco over Western Sahara.

So there was a partial peace initiative, as expected, although at the beginning of the mitigation period it was not clear where such an initiative would come from.

The recurrent conflict between Gaza and Israel tends to produce more and more incidents that occur as much in the amplification phase as in the mitigation phase. This is indicative of what appears to be a dead-end conflict to date, with no other negotiation than military power struggles on both sides that only buy a little time without bringing any future or regional balance. Consequently, over the 2013-2022 period, the “War Cycle” is less marked.

Will there be a war during this period 2022-2026? Yes, with about a 90% risk. But which one and when? The potential wars are against Iran (indirectly through proxy actors), the Palestinians and Syria, as well as any combination of the three. When, most likely in the period 2023-2025 at + or – a year from the expected peak, but it may happen (as in 2014) that it is frankly delayed.

Could this war be avoided? Perhaps, if we gave ourselves the means to launch something a little serious that would begin no later than mid-2022 and last as long as it takes to start building something and give a perspective to the Palestinian populations that no longer have any.

If today the only Israeli military alliance is with the US, possible regional integration should provoke a military alliance with Israel. A regional war like the one in Syria and Iraq could have provoked such an alliance. This is not the case at the moment, but it could be if there is finally a solution to the Arab-Israeli conflict.

There are 2 main obstacles to any evolution:

In 2010, in anticipation and to avoid the 2014-2017 round of wars, a manuscript “Will there be a lasting peace in Jerusalem??” was written. It was updated several times: the last relase was done in 2020. This text has never been used for attempting to find a settlement to this conflit.

The most likely outcome is that the two-state solution will be abandoned and lead to an Apartheid-like stalemate in South Africa. Such a situation will ultimately lead to the opposite of what Israel wants.