It is recommended to read the “Modeling the outbreak of wars to understand the war cycle” beforehand. The concepts described there are used in this page.

The civil wars in Iraq have allowed the materialization of the “War Cycle”.

Let’s come back to the 2nd Gulf War against Iraq in 2003. The opponents of the “War Cycle” will find there a remarkable case against the “War Cycle”.  The outbreak of this war took place at the peak of attenuation, just like someone (imaginary) who would have wanted to demonstrate that this Cycle makes no sense or would have wanted to minimize as much as possible the regional repercussions by avoiding the involvement of other regional actors.

What happens in such a remarkable case?

Do you remember what happened after the US intervention in Iraq from March 2003?

The U.S. Army has done a remarkable internal job in cataloguing all incidents as well as deaths and injuries.In 2010, following the publication of the U.S. military reports by WikiLeaks, the newspaper “Le Monde” dated Sunday 24 – Monday 25 October 2010 published a graph clearly showing a peak of violence in late 2006. Before the publication of this graph, it was admitted that the peak of violence in Iraq was rather in 2007, and the figures put forward were extremely variable depending on the sources. A careful analysis of the reports revealed by Wikileaks allowed us to measure the real violence in Iraq from 2004 to 2009. The measure is the number of victims. The source of the original graph published in Le Monde is “THE BUREAU OF INVESTIGATIVE JOURNALISM” According to U.S. Army reports published by Wikileaks, there were 110,000 deaths between 2004 and 2009. The following graph (whose form has been used to present it), shows the distribution of these victims over time (dead and wounded). It is the only reliable measure of the violence in Iraq known to date during this period and is based on reports, unlike many other estimates that relied on a few polls extrapolated by statistical methods under very different assumptions from one source to another.

This curve is based on 400,000 military reports provided by Wikileaks and exploited by the media.

Knowing that the amplification peak was in mid 2007 and that the next one is at the end of 2015, you can imagine from reading this graph what is presented in the following graph, if you have understood the “War Cycle”.

Is the “War Cycle” materialized?

When we look at this graph, we see half a period of the sinusoidal phenomenon that is materialized. Rather than having a single point: the outbreak of the war, we see an apparent materialization of the amplification peak by thousands of measurements.

What can someone who knows the “Cycle of Wars” conclude before 2014?

He can conclude that the departure of the Americans in 2011 from Iraq will take place in the most calm period. If this materialization is indeed that of the “Cycle of Wars”, in the period of amplification that will follow (2014 to 2017), we will see a component of violence/civil war within Iraq regain momentum until 2015 and then a new decline in this violence/civil war. The Americans left Iraq believing that the job was done and finished. If they had been aware of this phenomenon they could have come to the same conclusions and anticipated the period that followed.  Everything that happened afterwards confirmed this.

What we see in 2014 and 2015 : Since 2012 there has been a rise in violence (dotted line), confirming that the cycle identified by Wikileaks is indeed the materialization of the “War Cycle”. The media gradually spoke of a resumption of attacks, then at the end of 2013 spoke of a level of violence similar to that of 2008/2007 and then this new war in Iraq against Daech exploded all the meters.

The conflict in Iraq is losing its intensity. The Islamic State’s retreat is resulting in a gradual recapture of the territories initially conquered in 2014. Their action will likely continue in the classic forms of attacks but with what appears to be less intensity. A reliable measure or estimates have yet to be found to supplement these elements.  This is the first time the cycle could be materialized in thousands of measurement points over a period of more than 10 years. Half of the work is based on hundreds of thousands of US Army reports. However, there is a small flaw: since Wikileaks, there is no more data available through the Americans, and the Americans would rather hide this reality than contribute to confirming this materialization of the “War Cycle”. If the first part of the curve from 2004 to 2009 is not questionable, the extrapolation from 2014 to 2016 is not demonstrated. If someone were to say, “the author has mistaken his desires for realities,” I would not have a convincing argument to counter without finding data to demonstrate it. Good point, but not convincing at this point.

In March 2017, I came across the site “Iraqbodycount.org”. This site provides data on the number of civilian deaths in Iraq.  A group of British and American opponents of the 2003 Iraq War have documented and recorded the violent deaths from 2003 to 2022, so that everyone will remember the consequences of this war.

The following graph is a copy of the graph available on the Iraqbodycount.org website (https://www.iraqbodycount.org/database/) as of January 20, 2022 with the amplification and attenuation peaks of the “War Cycle” added. 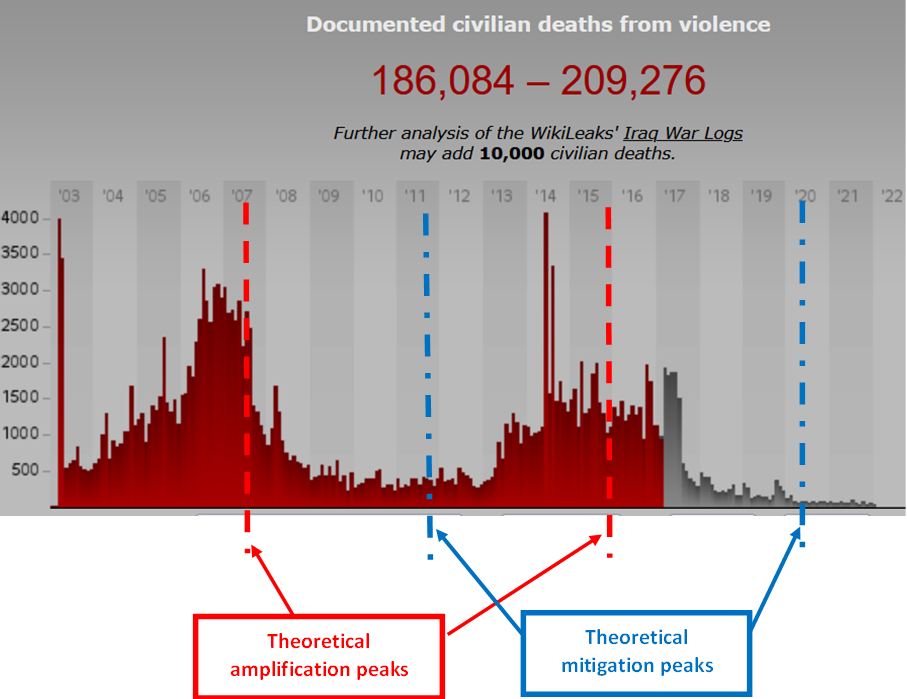 Using the data available on the site “iraqbodycount.org”, the Wikileaks data are confirmed, but more importantly it confirmed the period 2012-2017 for which there was no data available from the US military. Materialization/visualization is credible: a disturbing coincidence. These data collected by the actors of Iraqbodycount.org are the only ones existing over such a long period (2 complete periods of the “War Cycle”) and which are so credible.

Iraq: What can we conclude about the visualization/materialization of the “War Cycle”?

The principle of the Materialization/Visualization of the “War Cycle” seems credible, first with the data of the US army via Wikileaks, then from the data of Iraqbodycount.org.

Syria: Visualization of a period of the “War Cycle”

(The following text and table were taken from Wikipedia)

The following figures were all compiled by the SOHR, which is considered as an authoritative source on the subject. The figures are for documented deaths only, while SOHR estimates that another 100,000 undocumented deaths occurred in addition. The data includes not only civilians, but also all combatants on both sides. 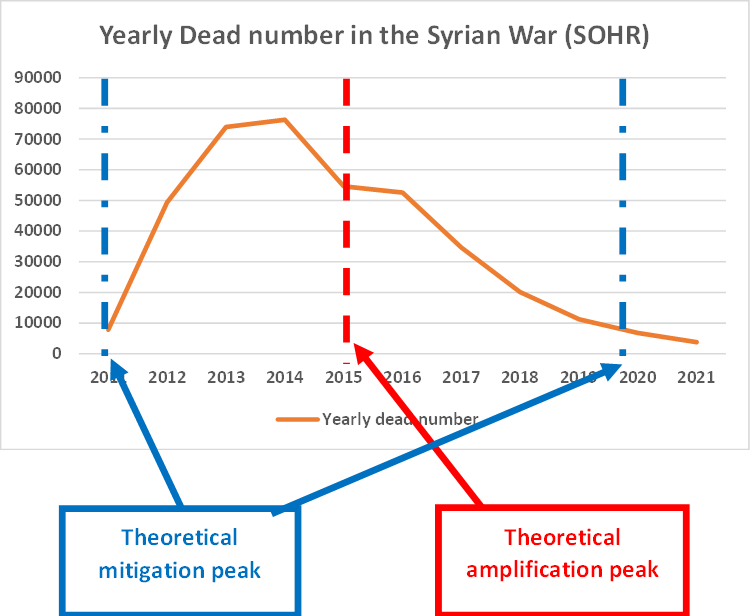 Because the war was not as long as in Iraq, the data covers only one period of the “War Cycle,” but there are similar data:

What do these Iraq & Syria data bring us for the demonstration of the “War Cycle”?

The data available on the Syrian war is a little less precise, but it does confirm what is found on the Iraq war that started in 2003. This is very important, since if one were to rely solely on the dates of the wars’ outbreak, these two wars (Iraq and Syria) broke out near a mitigation peak. Showing that amplification phases have an effect on the course of the war is very difficult by CONTEXTS alone. But by curves based on tens or hundreds of thousands of reports, it gives these curious coincidences, as if the “War Cycle” had an effect on the course of the war and its victims. While in the case of the dates of the outbreak of wars alone, one can imagine that only the leaders are sensitive to this phenomenon, with such curves one can see an effect on all the combatants and armed forces involved. The materialization is consistent with the modeling.

It is recommended that you reread in “Modeling the outbreak of wars to understand the war cycle” the section ” Case 3: the accumulation of causes is well above the threshold of war triggering, even before the amplification phase” . The two wars in Iraq and Syria are two examples of this case. The visualization/materialization of the “War Cycle” helps to better understand this “Case 3“.

Are there other examples?

It seems likely that the two world wars have similar curves. There is certainly, somewhere, data allowing to reconstitute them.

More examples will have to be found. This is a research project in its own right.

However, the likely limitations of this exercise must be considered:

Conclusion MATERIALIZATION/Visualization of the “War Cycle”

The case of the war in Iraq has made it possible to materialize what looks like the effect of the “War Cycle” by using the data available from the US army via Wikileaks. This materialization was confirmed by Iraqbodycount.org, which allowed to show the effect on 2 successive periods: 2 phases of amplification and 2 phases of attenuation. To date, we have no other data to measure the effect over such a long period and in the same country.

The case of the war in Syria allows us to confirm some of these elements from the data available from the SOHR.

This is a beginning of proof that will have to be confirmed with other cases, starting with the 2 world wars.

So, we cannot conclude definitively on this point of the materialization of the War Cycle, but the community of all those who think about wars certainly has the means to bring some other cases that will allow us to conclude. If this study reaches them one day, there may be a way to conclude this part which remains a rough research track with 2 very interesting cases, since they are based on a lot of data.