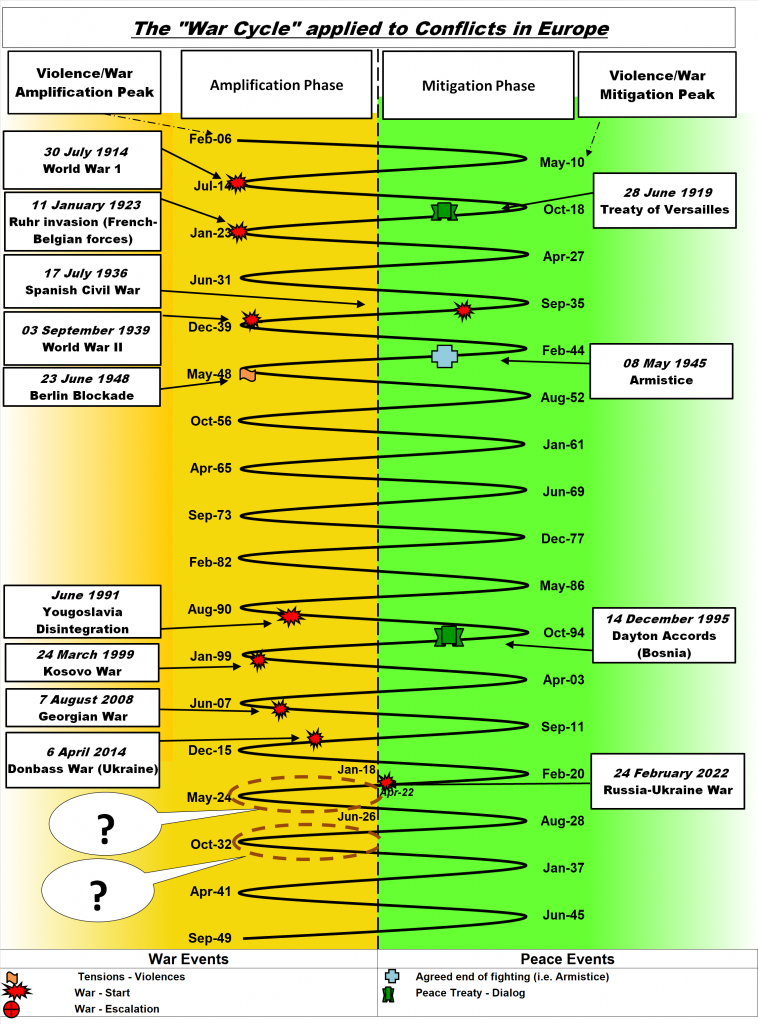 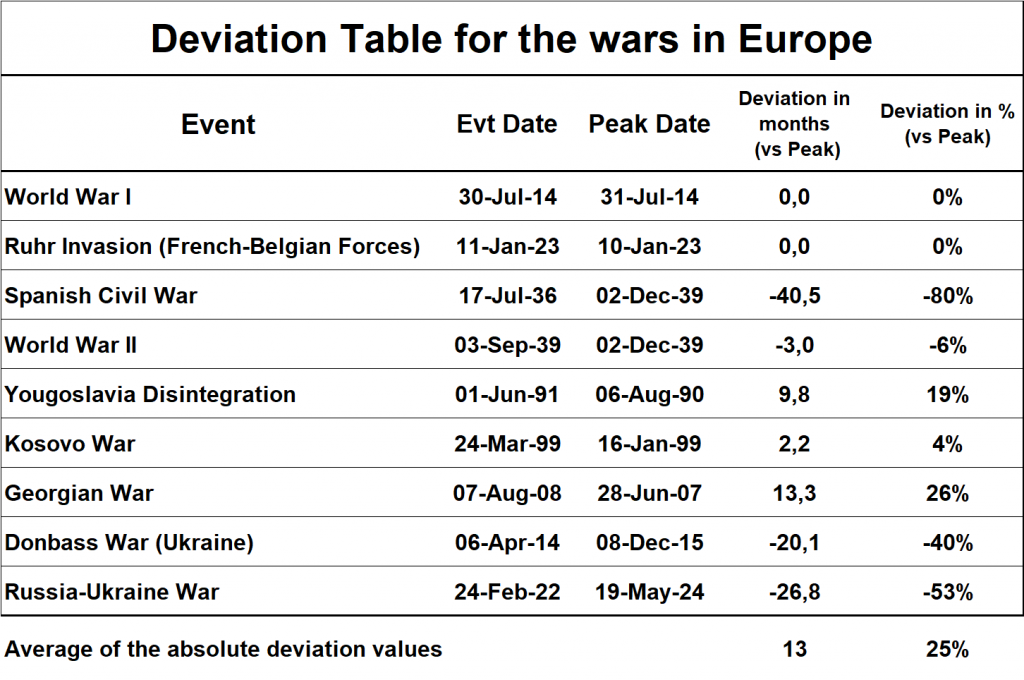 The context Wars in Europe helps to demonstrate the “War Cycle”

Analysis of Europe based on context data

Europe’s place in the “War Cycle”

After the Arab-Israeli conflict, the European context is the second remarkable case. These 2 geographical phases and their wars are the pillars of the demonstration and use of the “War Cycle”.

Europe should be considered as the geographical space that stretches from the Atlantic to the limits of Russia. That is to say, the space covered by the EU, NATO and the candidate countries to these institutions. In this context, the wars taking place in Europe have been taken into account. The Falklands War was also launched during an amplification phase but was not represented since it did not take place in Europe. The same goes for the Suez crisis in 1956 and the Gulf War in 1990. We could add other wars in which Europeans have been involved that verify the “War Cycle”, but, in this version, sobriety has been chosen for Europe on a simple criterion: the conventional wars that took place in Europe (geographically).

There are many possible variations in the Europe context, such as adding the main wars of Europe with the outside world. This context of conventional wars taking place on European soil is interesting because it naturally filters the wars. Taking into account all the other European wars requires taking only a few wars and can be considered more questionable, since the author decides to put one or the other war there.

Demonstrating the “War Cycle” from the European context is more complicated than in the case of the Arab-Israeli conflict, for several reasons:

Currently, since 1990, each phase of amplification of the “War Cycle” gives rise to a war (which can be multiple in the case of the disintegration of Yugoslavia), and there has been no new war that starts during the phases of attenuation. The geographical perimeter of these wars is always the same: within the perimeter of the former Socialist Bloc (including the USSR and socialist countries such as Yugoslavia).

For almost 45 years (1945 to 1990), in this context of wars in Europe, there was no conventional war on European soil despite the division and East-West antagonism, then the disintegration of the socialist blocks which caused the reappearance of wars that begin almost systematically during the amplification phases.

In the following lines, you will find the state of the forecast as of December 30, 2021. It is copied below to remind what was possible to forecast before the outbreak of the Russia-Ukraine war.

This war will be :

Without geopolitical evolution, we can already imagine tensions and wars around 2024, of the same type as those we experienced in 2008 and 2014, probably on a larger scale.

After the outbreak of the Russia-Ukraine war:

This war started just before the amplification phase, which is not a good sign. The “War Cycle” does not provide information on the conduct of operations and the outcome of military operations. The peak of amplification is in 2024, which may result in an aggravation or permanent crisis of several years. It will take a lot of will and imagination to find a new Europe-Russia balance after this war.

There is, in addition to the “War Cycle,” an important phenomenon that explains Russia’s behavior since 2014. The phenomenon of “Return of the past” is important. The Return, from the fall of the Berlin Wall and the disintegration of the USSR in 1989, began in 2014. It is a “reverse return” that as time goes on Russia is rebuilding and reasserting itself as if it had become the USSR or an equivalent power again. What we are seeing in 2022 is the almost delirious outcome: Russia thinks it is the USSR, acts as such, and provokes a global return of all of Europe and Russia to a time when relations were minimal between the USSR and the Western world and tension was perceptible on every subject. Inside Russia, the reflexes return to those of the USSR, both in censorship and restriction of freedoms and in the excessiveness of the objectives. Outside, the antagonism of the Cold War is rebuilt. This phenomenon of “reverse return” is what unconsciously guides Russia today. It is not explained in this document.

This war implies both the “War Cycle”, the “Return Theory” and some other applications in gestation as the “parallelism of history”.

Russia-Ukraine War and the “War Cycle”

This war begins a little before the amplification phase but is considered to confirm the “War Cycle”. We expected a war during the 2022-2026 amplification phase and there is one. The war that was expected could have been a reawakening of an existing conflict like Georgia or Ukraine or another dormant conflict in the former socialist perimeter of Europe, but on a larger scale. This is the case. If you want to see the details of what was planned, refer to the text “Does a cyclical Phenomenon favor War and Peace?” in the January 23, 2022 version that contains the Europe analysis updated on December 30, 2021. This update was minimal, as the structure and warfare expected during this period had already been described for several years

The Return Theory says that an event that has marked the collective unconscious can be relived at a multiple of 3085 days (8 years and 5 months) at + or – 2 years. When this return takes place, it can give rise to the questioning of the original event or to its confirmation (sometimes even both at the same time)

In this case, reliving the 2014 crisis and war is a first return. Usually the first returns are not very marked but can lead to significant changes. Example: the first return of the Kosovo war led to the independence of Kosovo (confirmation of the initial desire for independence as well as the abandonment of the trusteeship exercised and the link that had been recognized with Serbia = both the questioning of the initial event in the attachment to Serbia and the confirmation of the desire for independence).

This return of the past of 2014 thus acts as an amplifier (expressed officially by the justification of a neo-Nazi regime that seems somewhat invented but corresponds well to the justification given in 2014, as well as by the confirmation of the independence of the separatist republics). This is another case where we find both the questioning of the initial event – the change of Ukrainian power – and the confirmation of the questioning of Ukrainian sovereignty over several Ukrainian territories.

The events of 2014 and the new fears of eastern countries such as the Baltic States have been interpreted as a return of 25 years of the fall of the Berlin Wall of November 1989 as well as the gradual disintegration of the USSR. Back to the original event.

Everyone knows that Putin has not accepted the end of the USSR and that any opportunity to restore a past greatness would be good and would find in him sufficient justification to go in this direction.

This return of the past of the disintegration of the USSR is opposite. Instead of disintegrating Russia again, it provokes a progressive reaffirmation similar to the USSR and can go as far as taking and behaving like the USSR, which is the case in 2022. But in the long term Russia cannot be a power like the USSR: it has structural weaknesses and an absence of international project other than its own power. Russia is no longer in the socialist international of the peoples, but in the international of autocrats and dictators, which does not have the same impact on all countries. Autocrats and dictators will not fail to seek support from Russia. Will all these alliances give the earth a future to solve its pressing problems? Probably not.

In 2022, the Russian power takes itself for the USSR and acts as the USSR: both internally, with censorship and a flawless repression, and externally with an operation against a “brother” country that the USSR itself would not have denied and on a scale unknown in what the USSR did. Never the USSR has bombed and destroyed so savagely one of the socialist countries of Eastern Europe. Russia has kept for Ukraine an operation unimaginable both for our time and for the time of the USSR. This return of the past is accompanied by a similar behavior between Russia and the Western countries as that of the past between the USSR and the Western countries: a quasi rupture on all fronts, both media and economic. When will Russia stop taking itself for the USSR?  The defeat of the military operation in Ukraine, as it was planned, could mark the end of this reverse return: the restored greatness of Russia will take a bad blow and for a long time.

So we have several different elements of the Clock of the Unconscious contributing to the analysis of this war:

What role do Russian governance and Putin play in the amplification and disproportionality of the Russia-Ukraine war?

Observers of the Russian power point out that the COVID-19 pandemic has completely transformed the Russian power and Putin. Putin is a loner and no longer has a collegial decision-making system. The protocols he has put in place have alienated him from everyone.

Moreover, all those close to him are content to repeat what he expects. Putin is cut off from the real world with an information system that no longer allows him to know the details of what is happening. His natural reflexes to blame all problems on others and on the West countries contribute to his own blindness.

At the same time, Putin claims to be a historian and has spent a lot of time on the history of Ukraine and Russia to the point of concluding that Ukraine has never existed other than through Russia.

We note that the governance of the army on the ground does not correspond to the image that Putin has of it. Whether it is cluster bombs or indiscriminate and deadly bombings, even of hospitals, it is a reality that the Russian government denies. What exactly does it master?

What will be the consequences for the European institutions?

In any case, this could be the moment to think about institutions that coordinate all European problems and not just one or another problem in a different body. There is no global European governance.

The expected first European war of the period 2022-2026 has begun. The risks of war remain high during the phase of war amplification that has only just begun. The West reacts strongly without realizing that the wars it has waged in recent years (Kosovo, Afghanistan, the second Gulf War in 2003, bombing and destruction in Libya) were quite similar to what we are seeing in Ukraine: massive and more or less controlled bombing. How many civilian deaths during the war in Iraq? About 200,000 civilian deaths since the beginning of the war in 2003, including more than 100,000 deaths in the years directly following the American invasion. No matter how horrible the war in Ukraine is, we will never reach this figure, even if in both cases the war was justified on state lies and even if today’s lies are worse than yesterday’s. At least in Iraq, volunteers have been able to report on these deaths (Iraqbodycount.org). There, in Ukraine, it will be only lies and difficulties to make admit a disturbing historical truth.

Do the mechanisms identified in the Clock of the Unconscious contribute to this human madness? This is the most important current question, even if the answer is only a blank page: we see an influence but we do not yet know how it is possible.