The Return Theory says that a major event having marked the collective unconscious is relived at a multiple of 3085 days, with a strong probability of + or – 6 months. When this event is relived, the same thing can happen or its opposite.

A relative analysis of an event therefore consists of looking for all past events, at a multiple of 3085 days.

According to the Return Theory, the present event can be the return of one or more past events identified by this relative analysis.

These past events can therefore have an unconscious influence on the event that is analyzed in relative terms. Relative analysis is therefore a way of looking for unconscious motivations. 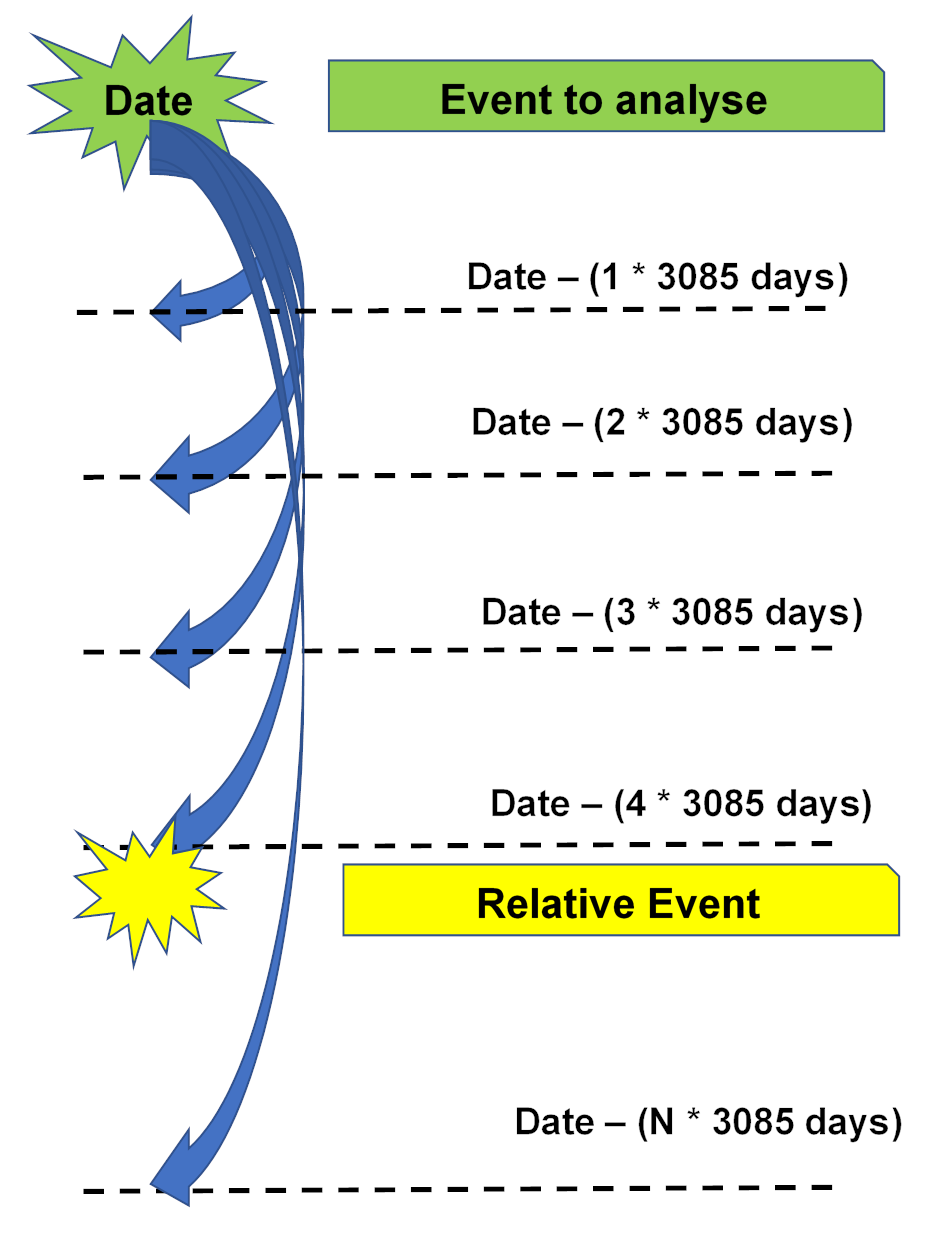 The structure of the collective mind and unconscious resembles (as a consequence of the Return Theory) a DVD jukebox that would play several time slots simultaneously. Each DVD has a duration of 3085 days (8 years and a little less than 6 months). In relative time, the present is expressed in a time between 0 and 3085 days.

It is this permanent accumulation of different pasts reread more or less strongly that corresponds to possible unconscious motivations. Relative analysis allows us to identify possible pasts that could have or have an unconscious influence on the present. Of course the concepts are completely new compared to what is said in our time (these concepts date back to 2001, the first use having been made after the attack of September 11, 2001 in October 2001).

These are the same concepts that are used to demonstrate possible parallelisms in history. There is a wonderful example that concerns the behavior of the USA in the Iraq war in 2003. This example has not been put on this site and has only been described in the 2012 edition of the Clock of the Unconscious. In 2003, the USA believed that the Second World War was over and behaved as if by liberating Iraq they were liberating the World, thus confirming the relative analysis made in October 2001 about the relative analysis of the attack of September 11, 2001.

How far back does a relative analysis go?

On what occasion can a relative analysis be made?

When there is an exceptional event for which there is no link with the past and/or for which we want to know the unconscious motivations that would allow us to understand the future behavior of the actors by finding one or more past events unconsciously marking the minds following the analyzed event. Since 2001, relative analysis has been used on four occasions: September 11, 2001, at the time of the Russia-Georgia war in 2008, during the Arab Spring in 2011 and during the Iran-Iraq war after the extension of the Islamic State.

Can a present event awaken the past to the point of making the past THE unconscious motivation for present behavior?

The Return Theory indicates that past items can be relived at “probable” times. But why not imagine that past elements, belonging to the unconscious (i.e. everything that is not conscious) can be “awakened”, following a present event? In this case, the present is not a return of the past, but the present provokes an awakening of the past which itself becomes an unconscious motivation of the present.

It is a hypothesis that seems logical in view of the knowledge that we now have about the unconscious.

The hypothesis was therefore put forward that events in the present could interact with past events. This awakening of the past by the present can become an unconscious and determining motivation.

This relative analysis is exceptionally used when there is no immediate or clearly visible return track.

You can see 2 examples by clicking on the link :

French to English translation on October 21, 2020