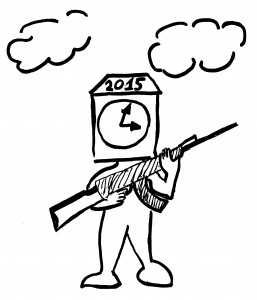 After the attacks of 13 November 2015 in France and in memory of the attacks of 7 January 2015 at Charlie Hebdo, you could think that this drawing was drawn specially in 2015 to illustrate this year 2015.

The truth is that this drawing was drawn in 2012 by the author to illustrate the cover page of a book that has never been distributed in the smallest bookstore: “Does the Clock of the Unconscious trigger Wars?».

This drawing symbolized the peak of violence at the end of 2015 during the period of widespread wars and violence from 2014 to 2017. This prediction of the wars was confirmed by the Ukrainian war in Europe, a new Gaza-Israel war and The transformation of the Syrian civil war into regional and then international war.

Apart from this drawing, the presented events and the forecasts do not come by chance, but by the simple methodical application of the concepts of the “Clock of the Unconscious”